Theresa and Joe Bruno built this house for grandchildren. Their former home near Birmingham Southern College couldn’t accommodate all of their family, so it was time to start anew. And because they had worked many times before with Charles A Moss, Jr., AIA, and Brice Construction, to design and build Bruno supermarkets, they relied on that team again for this house, their new larger home. For 40 years, this was the gathering place for the family and for symphony events, museum events, and visiting ambassadors. Benny LaRussa Jr., spokesperson for the family, says, “Whether for family or community, the house was open all the time.”

Entertaining grandchildren was a particular specialty of Joe Bruno’s. He invented diving competitions in the pool. When the third generation raced gas-powered go-carts around the circular drive, Joe raced too. Benny remembers whiffle ball games on the lawn: “He (Joe) could make whiffle balls do what Phil Niekro could do with baseballs.”

Considered an adventurous modern house when it was built, the interiors did not age as well as the grandchildren. In 2008, the house had passed on to the younger generation.

Though structurally sound, it appeared dated. Dark paneling, built-in shelving units, and wall-to-wall carpeting trapped this sentimental space in a style that had grown unfashionable. Architect Bill Ingram was called in with instruction “to make the house something he’d like to live in.”

And he did live in it for 18 months between the sale of his house and the completion of renovations needed for his next home. It was a win-win for everyone.

Original floor-to-ceiling glass panels blanketed the length of the house introducing natural light that played to the newly lightened walls and ceilings.

To others who are considering buying a mid-century period home, Bill’s advice is, “Don’t fight it. If you don’t like the architectural style, keep looking.”

Not surprisingly after almost 50 years, the kitchen and baths required the most changes. New cabinetry, new finishes and appliances were reorganized into a more workable plan within the spacious original kitchen. The glass curtain wall that is a signature of the existing architecture turned a corner in the kitchen. Rather than sacrifice the view, Bill cleverly installed open shelving in front of the glass.

The kitchen was gutted to create a more workable layout. Rather than cover the glass partitions, Bill floated a counter of Alabama marble and open shelving in front of the view. On the back wall, a gas cook top is concealed within the thick Alabama marble counter with custom vent hood above. A generous island incorporates storage and sink. Its shell of antique oak is a warm counterpoint to the stainless steel and glass. Dark gray under-counter cabinets visually recede. The large island was wrapped in antique oak, tempering the glass and stainless steel surfaces in the kitchen. Between the kitchen and the dining room, Bill repeated the gutsy architectural portal used to define the spaces between entry and living room.

The master bath was a small room by today’s standards and had no windows. But Mr. Bruno’s former home office nearby had high windows on three sides, and Bill transformed it into a luxury bath. Since surface finishes updated most of the house, this was the only place where reconstruction was required to open the new bath to the master bedroom and rework the former bath within a master suite.

For his time there, Bill did not buy any new furniture for the modern architecture. His antiques and traditional fabrics work because they are in sharp contrast with the clean architecture. To others who are considering buying a mid-century period home, Bill’s advice is, “Don’t fight it. If you don’t like the architectural style, keep looking.” He points out that inappropriate cosmetic alterations such as adding traditional molding to a contemporary house doesn’t change its character, they diminish it. Another alternative would be to consult with an architect, who like Bill, can envision appropriate ways to update a house without losing its soul. 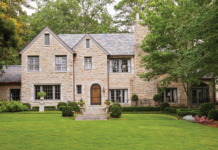