ABOVE By taking design cues from existing structures and the land itself, Peter Falkner creatively integrates a saltwater pool, outdoor room, and fireplace into a backyard garden footprint. Featured in “Terraced Delights, ” May/June 2016.

ABOVE A wooden gate, designed by Brent Donaldson, adds character to the winding paths that connect numerous outdoor gardens and gathering spots. The dreamy pool and fountain set the standard for the rest of the outdoor space. Featured in “Garden Party, ” May/June 2015.

ABOVE Club Place, a gated neighborhood in Mountain Brook, is surrounded by weathered brick walls. While the walls create wonderful parameters for the garden, landscape designer Kelly Hulsey implemented several methods including vertical plantings and climbing vines to make them a seamless part of the garden. Featured in “Beyond the Gate, ” September/October 2016.

ABOVE A playhouse and cottage garden atop Red Mountain revels in fairytale notions. Featured in “Garden of Small Delights, ” March/April 2016.

ABOVE With the help of Chad Bryant Architecture, Brenda and Howard Chapman were able to blend the design of their home into their garden. Featured in “Nature by Design, ” July/August 2016.

ABOVE Through a savvy use of space, Cynthia Massey's small backyard was transformed into a tranquil outdoor retreat. The Massey Garden received the 2013 Alabama State Merit Award from The American Society of Landscape Architects (ASLA). Featured in “Small-Scale and Saavy, ” May/June 2014.

ABOVE Nestled into Lace Bark Elms and boxwoods, the pool’s open-air pavilion, designed by architect James Carter, reflects the formal style of the Georgian home’s exterior with its clean lines and very few features so as not to detract from the elegant appeal of the overall project. The inviting deep blue of the rectangular pool was achieved by using a darker shade of plaster. The Luce garden won a ‘Merit Award’ for design from the Alabama Chapter of the ASLA (American Society of Landscape Architects) in 2013. Featured in “Grand Scheme, ” March/April 2014. 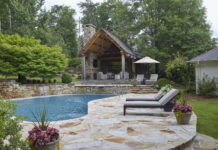 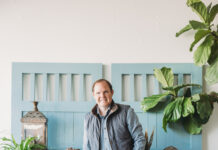 Troy Rhone – In the shop 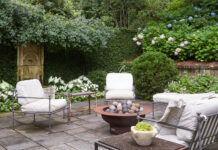