Every year, even before the Thanksgiving plates have been cleared, Doug Sutton and Andrew Nix begin hanging garland, decorating trees, and throwing open their bright blue front door to an almost endless cavalcade of guests. “Forget the 12 days of Christmas. For us, it’s more like 112 days here,’ says Doug. “We host tons of small dinners and cocktail parties, as well as fundraisers and events for organizations like Better Basics, Smile-A-Mile, and the Birmingham Bar Association.” Last year, the couple even opened their home for the Independent Presbyterian Church Holiday House Tour. “We also host a big annual Christmas party for as many as 200 guests,” Doug says.

The way Doug and Andrew see it, they are simply carrying on a tradition that comes with ownership of the “Hiden House,” a historic home in Redmont Park. Designed by architect Hugh Martin for Birmingham News associate editor Robert Hiden and his wife, Anne Earl, in 1923, the grand Georgian-style home has seen its fair share of dancing in the attic, intimate gatherings for visiting coteries of artists, and star-studded dinner parties through the years. “Julia Child even cooked in the kitchen when the Robertsons lived here,” says Doug of the former owners’ famous houseguest.

The history of the house—along with the idyllic mountain-top setting overlooking English Village—appealed to Doug and Andrew from the very start. Still, as with any historic home, there was work and restoration to be done and prior renovations to undo. “Everything was very fancy, very ornate,” Doug says. “The chandeliers were huge, all the walls were tea-stained, and someone had added Victorian moldings. It wasn’t right for us.” Luckily, with eight previous renovations under his belt, he wasn’t at all intimidated by the scope of the project. “When we left the closing table, we immediately gave the keys to the painters, the tile guys, and the electricians, and we started the process of stripping back the layers to get it closer to its original finishes,” says Doug.

After returning the home to its earliest incarnation (and adding a few modern updates), Doug and Andrew now find that the house truly shines during the holidays. Elaborately themed trees, designed with more than a little help from Doug’s grandmother who is a retired florist in North Carolina, complement the couple’s mix of antiques and eclectic art. Fresh garland pops against the pristine palette, and a plethora of plaid stockings are right at home on the mantel in the wood-paneled “Polo” lounge. And the best part? A steady stream of the homeowners’ nearest and dearest friends mingling all season long. Says Doug, “There’s always something going on here from Thanksgiving to New Year’s, and we try to add a little element of surprise at each and every turn.” 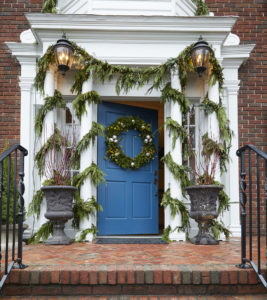 Let It Shine
Guests are greeted with a healthy dose of Christmas spirit as soon as they walk through the front door, thanks to the “silver-and-gold” tree in the wide entry hall. Trimmed with mercury glass ornaments that Doug has found “here, there, and everywhere,” the tree shimmers day and night in front of the stretch of windows along the staircase. The banister and antique table are twirled up with magnolia garland from Leaf & Petal. “We put all of the magnolia out early,” says Doug. “It browns out after about a week or two to a really pretty color. This year, we’ll save it and spray-paint it to reuse next year.” 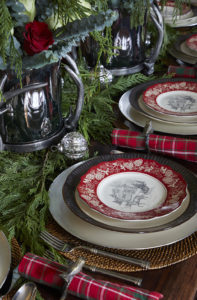 Set a Jolly Table
In a nod to the antler-themed tree in the “Polo” lounge, Doug selected a pair of large glass-and-iron-clad vases (“They look like antlers,” he explains.) for the table and filled them with red and yellow roses, eucalyptus, and cypress. He surrounded the centerpieces with more greenery and ornaments and then set the table with a mix of festive dishware that’s potluck-inspired. “We often borrow from our friends—they have 40 or 50 sets to choose from,” says Doug. 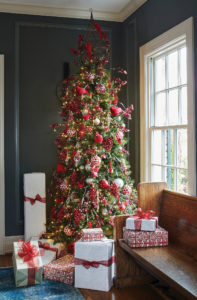 Make Tree Decorating a Team Sport
Doug always wanted a tree inspired by his alma mater, North Carolina State, but he was worried it might be tacky. Enter his grandmother, a retired North Carolina-based florist, and those tacky notions turned elegant. Working with the school’s colors (red and white), as well as with the memory of a cardinal and dogwood stained-glass piece designed by Doug’s parents, Doug and his grandmother spent two days sourcing red mercury glass ornaments and another two days looking for the birds. The topper is a moss basket, found at a floral wholesaler, with more birds attached. The theme continues with presents wrapped in NCSU Wolfpack colors.

Home(made) Is Where the Heart Is
When Doug was in search of the perfect tabletop décor (above), his grandmother’s floral talents came to the rescue once again. She sourced each and every pine cone strip from her yard and spent hours hot-gluing them to Styrofoam cones. “I told her I would love to
have three, but I didn’t realize how much work went into them,” says Doug. A red tailgate from an old Chevy truck stands in for Santa’s sled. The sunroom’s windows are draped with garland and bright white lights.

Red & Green
A spray of garland from Leaf & Petal and hand-blown hurricanes filled with hundreds of red cherries and white roses (thanks very much, Publix and GreenWise Market) add holiday cheer in the totally renovated kitchen (above), which features a custom island, limestone countertops and backsplash, crisp cabinetry painted in Revere Pewter by Benjamin Moore, an AGA stove, and classic brick floors. Red-hot tip: “If you use real cherries, don’t plan on them lasting for more than a few days,” says Doug. 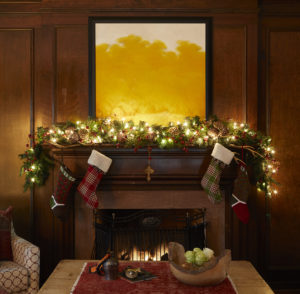 Hang Stockings With Care
In addition to garland crafted from cranberries, Frasier fir, gold-leaf pomegranates, and giant sparkly balls, the mantel in the “Polo” lounge is adorned with personalized plaid stockings for every member of the family, which includes Doug, Andrew, and English bulldog Bob. Andrew found the painting above the fireplace on his travels to Vietnam. 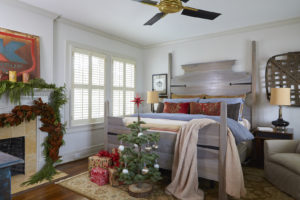 Branch Out
Visions of sugarplums dance more easily in heads when there’s greenery in the bedroom. The mantel is trimmed with magnolia and evergreen, while a Charlie Brown Christmas tree at the foot of the custom built bed (designed by Doug) is adorned with antique nickel-plated-and-copper ornaments and handblown glass pieces. The tree topper is a red glitter Star of David.

Andrew and Doug are very specific about what makes their holiday “nice” list. Doug shares a few of their holiday traditions and favorite things.