On a nondescript blacktop off of Highway 280 in Coosa County, a slice of country living at its best awaits those fortunate enough to be invited. The engaging atmosphere starts on the approach to Lauren and Chuck Welden’s hunting camp and farm; on the right is a shimmering pond beckoning for a fishing line and on the left are the striking ruins of an old mill. With car windows down, visitors can hear the blissful greeting of the rushing creek that runs next to the house.

The historic property, purchased by the Weldens in the 1990s, was once the site of a Coosa County gold rush and contains the remains of the Bradford Factory textile mill. “I grew up hearing stories from my grandfather about Coosa County where he was raised—about outlaws, fishing, and how hard it was to grow cotton,” says Chuck. “It was a natural place to look.”

The Weldens started by setting up camp in a renovated older house which once served as the office for Bradford Mill. They then added a log cabin from the 1850s and a smokehouse, which both were moved to the property and reassembled. Once they knew all four of their adult children had decided to stay close by in Birmingham—and with grandchildren in the mix—the Weldens decided it was time to build a new farmhouse on the site of the old caretaker’s place, which was beyond repair. Chuck, a partner in WeldenField Development, LLC, was hands-on in the design process, working with architect Michael O’Kelley and homebuilder Will Maxey.

Before starting the project, the couple did their research by visiting noteworthy hunting camps and lodges around the state to gather ideas. They landed on the idea of an updated version of the historic Southern dogtrot. “My favorite thing about this style is that it encourages everyone to come together in the dogtrot space,” says Chuck. “The bedrooms are smaller, and we don’t have television or internet. so it fosters social interaction in the main room.” A game table in the corner makes for fun family times, and comfortable furnishings encourage relaxation. “I wanted the house to be no fuss—easy setup and breakdown,” says Lauren. “Walk in the kitchen, put away the groceries, and start enjoying!”

That enjoyment definitely begins in the kitchen as guests are greeted with concession stand-like bins holding all manner of snacks, both sweet and savory. Open shelves are loaded with fine whiskeys on one side and clear spirits on the other. “People are constantly bringing wine, bourbon, their favorite jams, and so forth, so we are always ready to entertain,” says Chuck. The house is also stocked with extra slippers, all manner of games and puzzles, fishing tackle, and plenty of hunting gear. But don’t leave anything behind. “I don’t return items. If you want it, come back and get it!” laughs Chuck.

On the grounds around the house, a large firepit awaits gatherings on cold evenings while a vegetable garden thrives in the side yard—the finishing touches to this idyllic setting that beckons relaxation, recreation, and rejuvenation. 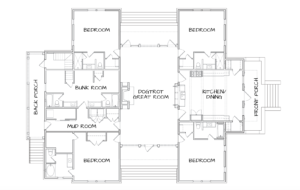 The Classic Dogtrot: Why It (Still) Works

Originating in the 1800s, the Southern dogtrot home is distinguished by a large, open breezeway that runs through the middle of the house with two separate areas on either side, all under one roof. “The design was born out of climate conditions before electricity or air conditioning—the central open-air plan allowed cross breezes to come through the house,” says architect Michael O’Kelley. “The design still resonates today, especially for a hunting camp or second home. We updated the dogtrot to make it more of a four-season house by adding the screens and vinyl panels on either end of the space.”