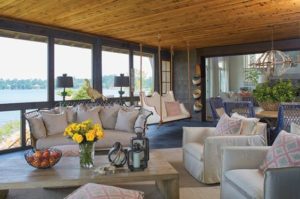 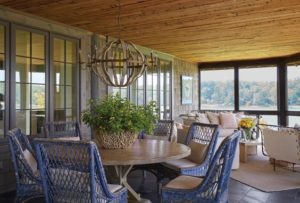 The reason to go to the lake is to enjoy the lake. The Laceys’ screened porch functions as an open-air living room. Doors to the interior living room are designed so that they can be opened and slipped out of sight, creating a seamless space for family and friends to mingle or just relax.

In April 2011, an EF4 tornado smashed its way across Lake Martin. Along the path of destruction was Lindsey and John Lacey’s vacation home. “The tornado picked it up and dropped it in the lake, ” Lindsey says. “Even the storm shelter was gone.”

With nothing remaining on their point of land—not even a tree—the Laceys set out to replace the home that began as a simple cabin and had expanded over the years to a rambling 9, 000 square feet.

Architect Tom Adams and interior designer Marie Noojin had the primary goal of making a getaway fit for the whole Lacey family—no mean feat, with seven children, ages 6 to 27.

“Because our family dynamic is so unusual, we knew there needed to be different areas of living, ” Lindsey says. “We wanted a room for the older kids to hang out and a room for Lego blocks.”

Making the disparate parts of the house work as an aesthetic whole, while keeping the ambiance warm and homey, presented a challenge. To recall the freestyle feel of the former home, Tom was inspired by traditional farmhouse and barn construction. Wood rescued from old barns forms the ceiling of the lower level and gazebo, as well as the antique beech flooring. “It looks nothing like the original house, but pays homage to the original house, ” says Tom.

The interior embraces a mix of old, new, and new-but-looks-old furnishings. The result is a comfortable, lived-in feeling. And the Lacey family does a lot of living in their new lake home, retreating to it most weekends.

“We do everything on the water, ” Lindsey says. “Pontoon boat, ski, wakeboard. We play croquet, pickle ball, and basketball. We entertain a lot, too.”

Sometimes the kids will take a metal detector and unearth something—a spoon or a bit of hardware—from the house the wind swept away. Literally built on a foundation of memories, the Laceys’ new lake house opens the door for many more, with fun and family as part of the design. 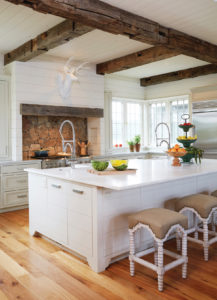 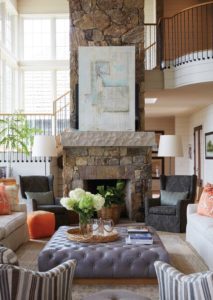 The massive island is topped with a single slab of marble, for a prep and eating surface that fits seamlessly into the kitchen’s clean, white palette. The ceiling beams—extracted from old barns—provide a contrast in color and texture.

The living room, with its open space and soaring ceiling, anchored by a massive stone fireplace, called for outsize furnishings, including a six-foot mixed media painting on the mantel, an enormous tufted ottoman, and extra-long sofas. Designer Marie Noojin of Defining Home says they achieved the right dimensions by finding the style that Lindsey liked and having the piece custom-made on a bigger scale. Because of its location on a promontory, every room has a view of the lake. 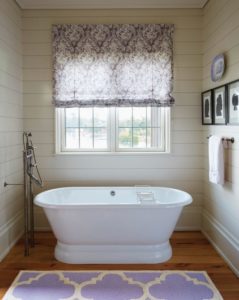 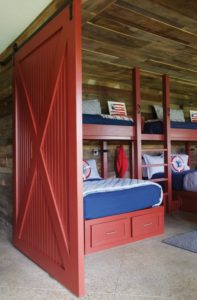 The master bath’s soaking tub is a modern fixture with an old-fashioned look. The gentle touch of lavender—considered a neutral in Victorian times—adds soft color. Old-fashioned silhouettes of Lacey children make this area warm and personal.

Rolling barn doors open to the nautical-themed bunk room. Reminiscent of summer camp, the red, white, and blue color scheme is not only cheery in a darker space, it’s appropriate for the Patriotic holidays that draw the family to Lake Martin.