Serendipity was definitely in play when John-Bryan Hopkins and Terrance Finley toured the historic Jordan House in Highland Park. That’s because they really weren’t looking to buy it initially. While totally infatuated with the home, the pair thought owning a property of this age and size was a daunting prospect—especially because they had recently downsized to a condo. But once an architect and inspector did an examination and found the house remarkably well maintained, the doubts turned into action. Three hours later, the Greek Revival home, overlooking Rhodes Park and designed by the prominent Birmingham architect William Weston, was theirs.

Weston put his stamp on the city with buildings such as City Federal, Quinlan Castle, and Temple Emanu-El in Southside, as well as additional private homes. Fortunately, the prior resident of Jordan House, nightclub owner Al Pilkington, had lovingly taken care of the place for decades and had made some quality choices. “I call it the ‘accidental’ house,” says John-Bryan, a designer. “We couldn’t believe the shape it was in. Al hired the best people to maintain it.”

Working with the home’s beautiful architectural details and to-die-for chandeliers, John-Bryan made it his first order of business to blow some fresh air throughout the rooms. The existing decor appeared heavy with dark colors and voluminous window treatments. “I needed to neutralize it,” says the designer. Because they sold their condo furnished, John-Bryan and Terrence arrived in their new home with very few pieces. This meant John-Bryan could start with a blank slate.

On the main floor, the designer gave the oversized rooms a very livable vibe. Walls in light beige combine with sisal rugs and grasscloth to help absorb the echo effects in the house. But nothing is too stark or modern—John-Bryan knows how to keep the balance. Beautiful antiques bring a sense of history. Artwork from Warhol and Basquiat adds a liveliness to the rooms, while an original Tiffany lamp brings a sense of warmth.

The second order of business involved reclaiming some forgotten spaces. Al had a habit of boarding up parts of rooms that he didn’t want to deal with, such as extra kitchens and baths that remained from when the house was divided into apartments in the 1950s. “As long as we had a living room, kitchen, and a place to sleep, we were fine with it at first. That’s about as much as we were thinking at the time we bought the house,” says John-Bryan. “Now I find my days are filled with planning how to bring the home back to its original state.” Another stroke of good fortune involved finding the home’s original doors, trim, and cabinets in storage. “We are working to resurrect the original footprint, including the lower level which was likely a real speakeasy,” says John-Bryan. “There is evidence of a dance floor, bar, secret exit, and faded robin’s-egg blue walls with murals of 1930’s dancing girls.”

The designer’s passion for the provenance of Jordan House is palpable. Sounding almost like a curator at times rather than the owner, he understands his position as a steward of a grand dame appreciated by many. “Our condo was located so close to the house, and we admired it over the years as so many others have done—and still do,” says John-Bryan. “This home will only get better with age and hopefully, with its next caretakers.” 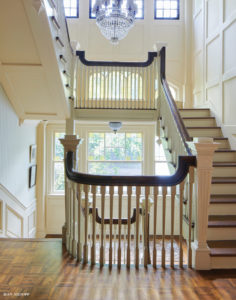 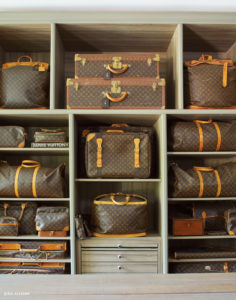 Above Left: The original staircase maintains its elegant air. Above Right: With so many bedrooms, it was easy to turn one into a wonderful walk-in closet/men’s lounge with plenty of space to hold all the Louis Vuitton. 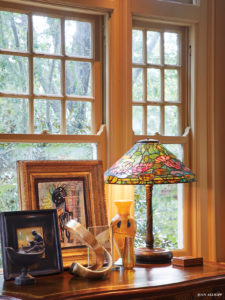 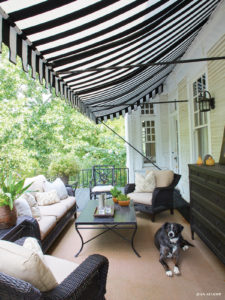 Above Left: An engaging vignette of stacked art next to a Tiffany lamp resides in a bay window. Above Right: The family dog, Salie, enjoys shade from the black-and-white-striped awning on the upstairs terrace.