No strangers to the 30A scene, this Birmingham couple had previously owned houses in Rosemary Beach, WaterColor, and WaterSound. But none of these homes had been located right on the Gulf.  As soon as they saw this oceanfront home in Old Florida Beach, they knew they had discovered a hidden gem. The location was ideal, and the floor plan lent itself to expansion. The owners knew exactly what they wanted in the renovation and wasted no time getting to work. “Within six hours of walking the property, we had drawn up a plan,” says the wife. Next, they met with 30A architect Paul Geary of T. S. Adams Studio. “We know there’s nothing worse than a client showing up at the first design meeting with plans they’ve already drawn,” the wife laughs. “Luckily, Paul didn’t kick us out of his office.”

The first order of business was taking the original house down to the foundation and two walls. Then Paul set out to integrate livable, gracious rooms within a new footprint, while instilling exteriors and interiors with a fresh take on the traditional Florida Cracker aesthetic.

The original house had main living spaces and a master bedroom on the upper level, resulting in a series of small cut-up rooms. “We quickly realized that if we relocated the master bedroom to the first floor, it would vastly open up the view in the second-level living areas, which is where it really counts,” says Paul. The owners also decided that the original two-car garage could be better utilized as finished space for guest bedrooms. These two concessions created a world of opportunity and served as the game-changers in terms of enhancing and increasing the liveable square footage.

To connect the interiors to the outdoors, five sets of French doors swing out to welcome in sunlight and ocean breezes. In keeping with the classic Old Florida feel, reclaimed cypress in natural tones enlivens the ceiling and pairs with random-width, tongue-and-groove wood on the walls. The generous kitchen anchors a corner of the main space without being front and center. “I like to be part of the action, but I’d rather not feel like I am cooking in the living room,” says the wife. It’s just one more aspect of the home that the couple loves. Adds the husband, “We’ve come full circle along 30A, but this is where we were supposed to end up.” 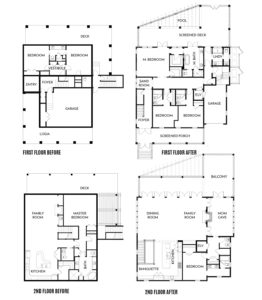 Before & After: A Little Bigger, A Lot Better

The original floor plan was basically a box of a house with wrap-around porches. The goal was to follow the setbacks and bump out the structure, adding outdoor rooms as close as possible to the water. Accommodating the pool was a major concern. After exploring various options, the owners and architect came up with a garden arbor trellis that angles out and over the pool. Large screen panels fill in the void areas to maintain the Florida vernacular theme of the architecture. Two guest bedrooms with private baths on the first floor now occupy the prime space previously devoted to the garage. The rest of the first floor accommodates the master suite with sweeping views of the Gulf. A third guest bedroom, conveniently located on the second floor, allows even more space for overnight visitors.