Susan Presley had three good reasons to move away from her waterfront Florida home—“my three grandsons,” she says. “I found myself driving up very frequently to see sports and school activities and to attend other special events for them, so I decided it would work best to live nearby.”

While family was the biggest incentive to move north, Susan also felt the need to downsize and lighten the load of upkeep. “I wanted to scale down significantly,” she says. “My home on the water required a lot of maintenance on both the home and landscaping. So, for this house, I wanted everything to be much more manageable.”

With those things in mind, Susan found a lot in Edgewood and turned to Twin Construction for design assistance. Working with Twin’s plan designer, Crystal Tucker, Susan laid out the specific requests she had for the floorplan. “I wanted all of the spaces that I use most located on the first floor,” she says, which included the living and dining areas, kitchen, master suite, laundry room, and office space. “In looking through the photos Susan had gathered for inspiration, it became clear she had a distinct vision for what her home would look like,” says Crystal. “Certain architectural features reappeared in multiple photos she provided, such as steep pitches, a cedar-shake roof, white tones, and lots of glass. She had really done her homework.” But creating a design that worked for Susan and still fit within the lot’s narrow width restrictions was a challenge—one Crystal was ready to tackle. “We had to be thoughtful in laying out the rooms so the house didn’t feel too narrow,” she says.

Susan also had some other things on her wish list that helped shape how her home flows from room to room, as well as the choices made for the interior design. “I wanted an open, airy kitchen that would flow into the family room,” she says. “Having a separate pantry, as well as lots of cabinet storage space, was also important. And I didn’t want a formal living room. One of the most important things for me was my bedroom. A vaulted ceiling was a must, and I wanted exposed timbers.”

Thanks to Crystal and Twin interior designer Laurie Fulkerson, Susan’s visions came to life in every space. Laurie outfitted the four-bedroom, three-and-a-half-bath home in soft colors and classic materials that she describes as timeless, warm, and inviting. “We used Calacatta gold marble, which gives a beautiful, warm look,” she says. “The home also has a lot of wood, limestone, and wallpaper, all with a creamy color palette as a backdrop. Most of the furnishings are new with some antiques bought locally. Susan did have some personal pieces she wanted to use, so I made a point to incorporate those for her. Overall, the interiors have a timeless quality with plenty of warmth, which perfectly reflects Susan’s personality.”

With interiors in place, Susan turned her attention to the exterior surroundings. Behind the house, tucked between the garage and the property line, she incorporated a raised-bed garden. “I enjoy spending time tending to flowers and seeing things grow and bloom,” she says. “I have visited a lot of European gardens, and I wanted to make mine similar to those by incorporating lots of pebbles, large planters, and water features.” Randy McDaniel of McDaniel Land Designs helped with the design. “I envisioned a strong graphic pattern with a neat-and-tidy presence,” he says. The raised beds are simple rectangles with each inside corner clipped to create a circular space for the center urn water feature. Adds Susan, “If I had one tip for someone starting a raised-bed garden, it would be to do a lot of research about what works best with the sun exposure, what plants are the easiest to care for, and which ones offer the most color for impact.”

For her own beds, Susan started with zinnias and dusty miller. “They are both so easy to grow here, and their cuttings make beautiful arrangements,” she says. “I also have always had great success with pentas in the sun and impatiens in the shade. Green leaf sweet potato vine is easy and prolific and really sets off a garden with its trailing structure. I once read that you should have a thriller, a filler, and a spiller, so I have implemented all three of those in the beds and surrounding pots.”

Now settled in her new space, Susan says her home and yard have provided everything she wanted, with the best part being the short commute to see her grandsons. “I like waking up to have my cup of coffee while enjoying the garden view through my master bedroom window,” she says. “Then it’s an easy stroll to my daughter’s house to walk my grandsons to Edgewood Elementary.” After school, the boys often come to her house to play with neighbors. “I love that my front yard has already hosted many football games and Nerf gun battles,” Susan says. 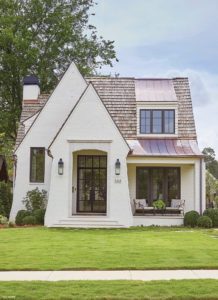 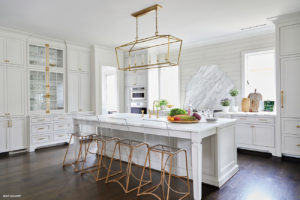 Now is the time to plan for the warmer months ahead. Landscape designer Randy McDaniel of McDaniel Land Designs shares tips for creating a backyard garden full of spring blooms.

RAISE IT UP. Raised beds make tending to plants easier because there’s no need to crouch down on your knees. But according to Randy, there’s an even better reason to garden above ground. “Raised beds help ensure that you have good soil and good drainage. To me, that’s as good as the convenience of not having to bend over.”

UNDER FOOT. The gravel in Susan’s garden is called Selma Brown gravel. “Oftentimes people will assume it’s peagravel, but this gravel has a richer brown color and is angular so it locks together and compacts to form a surface that’s easier to walk on,” says Randy. “Peagravel can feel like you’re walking on marbles.”

MAKE ROOM. “I like to have a place to sit,” Randy says of garden must-haves. “This garden has a bench at its back edge that acts as a terminating focal element. I love that Susan added a console table! She’s furnished the area like a room, and that makes it feel like a space where you want to hang out.”

CREATE YEAR-ROUND INTEREST. Vertically-growing cedar trees at the back of the lot, along with the Confederate jasmine climbing vine, offer evergreen color. In the summer, Susan fills beds with annuals and vegetables.