When something is meant to be, there’s no denying it. Just ask Ginger and Jeffrey Nix, who were not in the market to move when multiple friends texted them about one specific house for sale in Hollywood. “I have always loved the Hollywood area with its historic homes and established green spaces, ” Ginger says. “We finally decided to look at the house, and when we walked in, we just loved it.”

And what wasn’t to love? The historic Tudor Revival home, which was built in 1926, sat on a cul-de-sac street alongside numerous neighbors with young children. Another perk was that the previous owners, contractors Kristi and Dan Logan, had already done extensive renovations with designer Shea Bryars. While they didn’t change the home’s original footprint, they had reconfigured the floorplan, moving the kitchen to what was once the dining room, turning the original kitchen into a mudroom, and rearranging some of the upstairs bathrooms and closets, as well as modernizing and updating the fixtures and general design. White marble, wood finishes, and open shelving, along with a La Cornue range, nod to European farmhouse style. Windows open onto the backyard, allowing Ginger to keep an eye on her children at play. 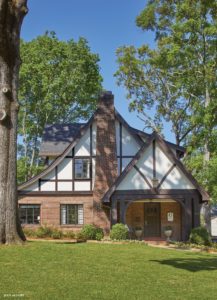 “It’s rare to walk into a home that has been renovated and to like all of the finishes and changes, but that’s exactly what happened, ” Ginger says. “It felt like it was meant for us from the moment we stepped in the door. We are so grateful that the previous owners brought this house back to life. It’s amazing what they did.”

The only issue that had to be dealt with was the space—or lack thereof—in certain places. “Overall it was great, but we just needed to make it a little more practical for us, ” Ginger says. To suit the family of four, the home’s square footage needed to be creatively maximized wherever possible. Accepting that challenge was interior designer and family friend Marianne Strong, who merged fun and functionality throughout the interiors. That included creating a defined eating space, which she did by transforming an enclosed porch into a dining room. To make the narrow room work, Marianne installed a custom banquette. “We couldn’t have chairs on both sides of the table, so the banquette was an ideal option, ” she explains. The designer also created storage options wherever possible, such as in the living room, where she added custom bookcases to each side of the fireplace. In addition, the mudroom had to become multifunctional and highly organized as it housed many things in one small space, including a laundry area, Ginger’s office, a second sink, a coffee bar, and a pantry. To organize and maximize the room, Marianne placed custom cubbies by the door with a bench seat and shelving to provide more storage for the kids. “It’s a lot of different things happening in one spot, but now it’s my favorite room in the house, ” Ginger says.

Three bedrooms fill the upstairs, including the master suite, which received a new Restoration Hardware bed, new linens, and draperies with embroidered trim. “Because it has so many windows and is on the second floor, it feels like we sleep in a sleep in a treehouse, ” says Ginger. Despite all the pretty, the room was in need of creative storage, and Marianne solved that by adding an entire wall of built-ins—essentially creating a second closet. The original too-tiny clothes closet now holds shoes and accessories.

A small basement was transformed into a playroom, a place Ginger says the kids especially love thanks to a little niche carved out from beneath the stairs. “Inside and out, we’ve made this home as functional as possible while keeping it beautiful, ” Ginger says. “Simplifying your space is really freeing, and I think that is part of the appeal of this house.” 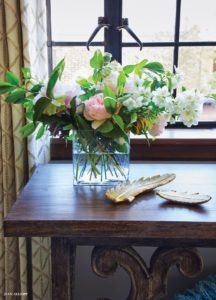 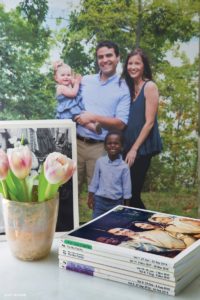 Since moving into the home, Ginger has spent a lot of time simplifying and organizing things, and that includes priceless family photos. She uses Chatbooks, an app that does the hard work of selecting photos and putting albums together for you. The app automatically pulls photos from your phone or social media accounts, chooses the best ones, and creates beautiful bound albums. “Most of us just have photos stored electronically, ” Ginger says. “This is a great way to save those memories so that you can really enjoy them.” 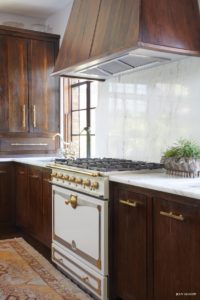 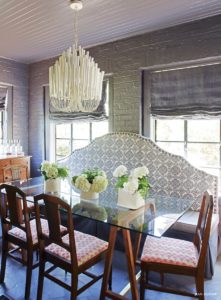 Left: The dark walnut-stained wood cabinets in the kitchen create a pleasing contrast to the white marble countertops. Right: The original porch became the family’s dining space. “Marianne (Strong) convinced us to paint it the dark charcoal color for drama, ” Ginger says of her designer. “I wasn’t sure at first, but now we love it!” A custom banquette (covered in kid-friendly faux leather) lines one side of the table to save space in the narrow room. A new glass-top table (to keep it airy) and a new chandelier combine with antique chairs and Ginger’s great grandmother’s sideboard, striking a happy balance of styles. 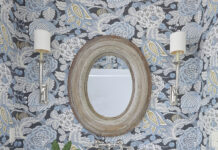 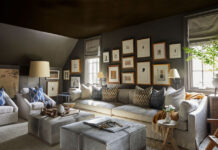 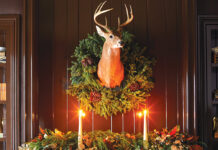 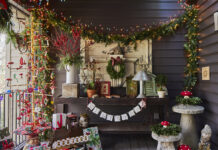 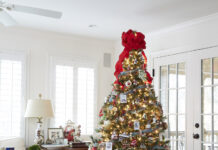