Martha and Robert Haley’s previous home was big enough to fit their family of five (plus two dogs), but as their kids got older and started leaving the nest, it began to feel cavernous. They found themselves searching for a cozier home that would serve their needs long term. 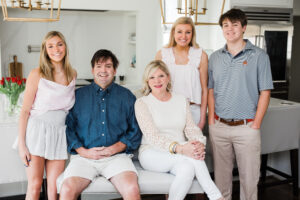 After meeting Leigh and Kevin Misso of River Brook Design & Construction, the Hayleys knew the duo would be the team to call when (and if) they found the perfect property.

As soon as a new listing popped up in a neighborhood the Haleys liked, the couple invited the Missos to tag along for the showing. “We immediately started dreaming about what it could be,” Leigh says. The Haleys made an offer that day, and soon the house was theirs—but not everyone was excited.

Because they had loved their old house so much, the Haley kids were understandably reluctant to embrace change. “I think they were all kind of worried about it,” Martha says. Before renovations even began, they gave their son, Peyton, a tour, including the windowless basement which would become his bedroom and hangout space. “He took one look and walked out of the house,” Martha says. Needless to say, there was a lot of work—both construction and convincing—to be done before everyone would feel at home. “We all wanted the house to have a lot of charm,” Leigh says. “And we wanted it to fit into the neighborhood. There’s a new custom build around most every corner, and we wanted the same level of detail applied to this house.” 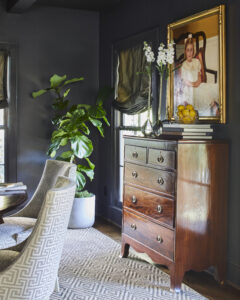 The home had good bones, but the square footage wasn’t used to its best advantage. In addition to cosmetic updates, the Haleys desired an open floorplan to encourage family time. They also wanted to add purposeful task areas such as a butler’s pantry and half bath. And because they planned to include a den in the basement, they decided they had no use for both a formal living room and casual family room on the main level.

The solution was a major overhaul, and renovations began by gutting the house until only the foundation and exterior framing remained. The previously closed-off kitchen moved to the space once occupied by the formal living room. The master suite gained a raised ceiling, as well as a larger, more functional bathroom and closet. “We used all of the square footage we possibly could,” Robert says. “I don’t like wasted space. If you’ve got the room, you might as well use it.”

Even though the children would be leaving the nest (and some had already flown), the Haleys and Missos made sure to include plenty of comforts for them. The upstairs was converted into a suite for the girls, complete with private bedrooms and baths. (In their former home, the girls shared a bathroom.)

Tip:
To visually increase the height of a room, hang drapery rods at ceiling height and allow drapes to just barely graze the floor.

For all the kids, the basement garage was finished to create space for an epic media/entertainment room complete with a pool table, ping pong table, wet bar, and two ginormous TVs. Custom glass doors that accordion-fold replaced the original garage doors to allow for indoor-outdoor entertaining. Previously a “dungeon” as Martha called it, her son’s room on the lower level now features windows and four built-in bunk beds ready for his college friends to visit and stay the night.

During the seven-month renovation, Leigh also worked with the Haleys on furnishing selections, deciding what to keep from their previous house and what they needed to purchase new. When construction was complete, the Missos convinced the Haleys to let them move their furnishings in “Property Brothers”-style and have a big reveal. “There was a wow factor when we saw it all finished,” Robert says. And their son, once a skeptic, immediately wanted to have people over—especially after seeing the basement renovation.

Since settling in, the Haley family has used and enjoyed every inch of their house. Even with all of the kids at home during the pandemic lockdown, everyone had separate and communal spaces to spend time in without being on top of each other. Thanks to creative planning, the Haleys now have an “empty nest” home that also works when their nest is full. 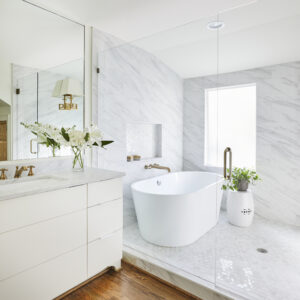 Tip:
Consider tapping into unused attic space to raise ceiling heights. The Haleys’ ceilings went from 9 feet to 14 feet in the master bedroom and kitchen.