Some people dream of Christmas presents. Then there are Mark Thompson and Jay Draper, who dream of something altogether different—Christmas plants. The partners co-own Shoppe, the impossibly stylish garden-and-home store located on Forest Park’s Clairmont Avenue. It’s a venture that was a long time coming for both. “Jay has been working in nurseries since he was 14 years old,” Mark says. “And I’ve been knee-deep in gardening just as long. I was that neighborhood kid who would help all the old ladies in their yards. It was always, ‘Sure, I’ll take some of those daylilies’ and ‘I’d love a few hostas.’”

It’s no surprise, then, that during the holidays, their townhome, located a short walk from the store, becomes a showplace for decadent displays of seasonal flora and fauna. Everything from mantels and windows to doorways and chandeliers is twirled up with boughs of boxwood, magnolia, fir, pine, and more. Meanwhile, winter blooms such as amaryllis, paperwhites, and poinsettias punctuate tabletops and shelves at every turn. “We’re less about glitz and more about bringing the outdoors in this time of year,” says Mark.

That philosophy also wonderfully sums up the design aesthetic the couple has applied to their home’s décor. Built in 1915 as the Clairmont Terrace apartments, the townhome boasts they-don’t-make-‘em-like-they-used-to details such as high ceilings and handsome millwork. And to showcase those old bones, Mark and Jay developed a simple, whole-house palette of mossy greens, rich browns, and rusty oranges. The earthy scheme makes an elegant backdrop for a bounty of inherited antique furniture and old family photos. As Mark says, “There’s nothing like creating rooms that remind you of where you’ve come from.”

And while the home oozes sophistication, much of it was pulled together (surprisingly!) with bargain finds. “I’m always looking for a deal, while Jay is always pulled toward more expensive items,” says Mark. “Striking a balance has been important at this house.”

Mark’s drive for a bargain has led to numerous late-night internet searches and some very savvy second-hand purchases. Case in point: the elegant Baker sofa that anchors the study. “Jay told me I could do peach on anything but a sofa,” he says. “Wouldn’t you know I found the most perfect peach sofa the very next week?” There have also been times when Mark took design matters into his own hands, creating the large abstract artwork displayed in the living room (created from two-by-fours and drop cloth canvas) and hand-painting the dining room mural.

But that artful handiwork really has nothing on the couple’s aforementioned holiday creations. Together, Mark and Jay string garlands, craft wreaths, and arrange luscious florals. “We have a habit of one of us starting a project and the other finishing it,” Mark says. “It’s our form of teamwork.” Mixed into the already cozy, layered rooms, the decorations seem to beckon guests to sit and stay awhile, which is exactly what Mark and Jay want friends and family to do—especially during the holidays. 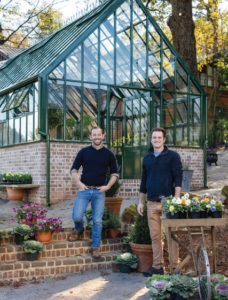 Choose similar finishes. In the dining room, we paired a hand-me-down dining table and an inexpensive sideboard with serious-investment dining chairs. The combination feels seamless thanks to similar wood tones.

Rethink humble materials, and go wild with pattern. The kitchen floor looks stylish but is merely vinyl tiles laid in a graphic stripe. The striking design definitely holds its own amongst the room’s niceties such as hand-glazed subway tile and performance appliances.

Consider a whole-house palette for a more refined feel. Choosing a cohesive color scheme and using it from room to room brings a level of sophistication and also elevates thrifty finds. In our case, we chose shades of green, orange, and brown. 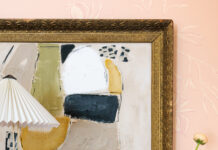