When it comes to barbecue in Alabama, we mean business. “After football, our next religion is barbecue, ” says Lee Sentell, director of the Alabama Tourism Department. “In our state, we expect even the youngest to declare a similar lifelong allegiance.” Travel writer Annette Thompson covers the mouth-watering best in Alabama Barbecue: Delicious Road Trips. Check out these excerpts from the book with picks near The Capstone and on The Plains. Which side will you choose?

THE ORIGINAL DREAMLAND BAR-B-QUE, TUSCALOOSA
Back in the 1960s and 1970s, Dreamland developed devoted fans who would travel across the nation to eat at this storied spot. During The University of Alabama’s televised football games, the announcers would brag on this little place run by Big Daddy and Mrs. Lily, a place to belly up to a slab of ribs and a stack of white bread. Son and daughter, John Jr. and Jeanette Bishop-Hall, took over in the 1980s. By the 1990s, the brand’s franchise era began. But people still seek out this particular location as a ground zero for rib mania. 5525 15th Ave. E.; 205.758.8135

ARCHIBALD'S BAR-B-Q, NORTHPORT
Archibald’s began as a backyard pit. Then people began hearing about it and coming round to see for themselves. Soon the pit crew built a structure around it, and a barbecue joint was born. Now, 50 plus years later, the barbecue—smoked ribs and pulled pork—is just as remarkable as in 1962. 1211 MLK Blvd.; 205.345.6861

ARCHIBALD & WOODROW'S BAR-B-Q, TUSCALOOSA
Woodrow Washington, whose momma runs Archibald’s in Northport, created this little barbecue and soul food joint. “I’m doing the exact same thing (as Archibald’s), but I added more to my menu, ” he said. The little cinderblock building blends family barbecue with meats such as pork chops, country fried steak, and veggies. Yet Woodrow’s chopped pork in a light vinegar sauce on white bread and smoked ribs draws in the most customers. 4215 Greensboro Ave.; 205.331.4858

CHUCK'S BAR-B-QUE, OPELIKA
Chuck’s was started in the mid-seventies by Chuck Ferrell and his wife Bonnie. These days, Chuck has retired, and longtime employee Jody Escoe runs the place. Not much has changed. “We cook fast over flames, ” Jody said. “Our meat is not smoked. We don’t leave it on all night—only five to six hours to cook a boneless butt.” 905 Short Ave.; 334.749.4043

PRICE'S BARBECUE HOUSE, AUBURN
A pig sporting an Auburn University football jersey sits on its haunches in front of this long-standing College Street spot. Inside, Jeff Price stacks chipped pork with mustard slaw and pickles on a bun, then puts it on a sandwich press (that way you get the smoke meat taste all the way through the condiments). 345 S. College St.; 334.826.8277

BYRON'S SMOKEHOUSE, AUBURN
Byron’s Smokehouse shares a history with many other Alabama joints. “My father wasn’t ready for retirement and he’d always cooked. So my brother, sister and I helped him get started, ” owner Glen Gulledge said. “The barbecue sauce is my recipe. It’s named after my father. He taught us all to cook.” 436 Opelika Road; 334.887.9981

ABOUT THE BOOK
Photographer Art Meripol and writer Annette Thompson spent countless hours on the road to discover the best barbecue in the state. Check out more great eats in “Alabama Barbecue: Delicious Road Trips” and find more than enough smoky establishments to satisfy your cravings. 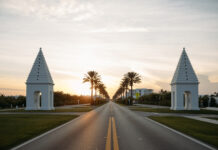 Alys Beach at a Glance

Lake Traditions Begin at The Heritage

3 Destinations to Explore this Spring 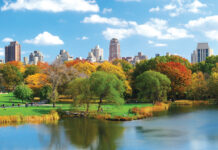