An old house that’s been sitting vacant for years with an overgrown yard, green shag carpet, and water coming out of the walls would be more than enough to scare most people away—but not Peter Falkner. A landscape design specialist, Peter saw well past the current state of the home to the potential of perfection—especially since it was in a sought-after Vestavia Hills neighborhood that he and his wife, Marchelle, wanted to call home. “It definitely wasn’t cute,” says Peter, “but it excited me because I love a project and the chance to create something out of nothing.”

To make the project happen, Peter called on Doug Davis of Hannon Douglas, who formulated the plan for adding some style to the unsightly exterior and opening up the interior to accommodate kids, as well as a love of entertaining. Doug transformed the den into a master suite, converted the carport into a playroom, and updated the kitchen. On the outside, he changed the angle of the roof, centered the front windows, and added a front porch to give the home a defining element. A fresh coat of paint and two shutters later, the house was much better suited for the family of four. But with two growing boys, the Falkners soon realized that they still needed more space. That’s when Peter once again called in Doug to do the only possible thing—go up. “We just couldn’t move,” Peter says. “We already loved the house and its location.”

Doug creatively worked out a way to add a second story without disturbing the work done in the previous renovation or making the house look too large—something Peter and Marchelle were trying to avoid. He added height to only one side so that the house didn’t feel big, allowing space for a new playroom, bunk room for guests, bathroom, and the boys’ bedroom upstairs. The downstairs playroom was converted into an office, and a downstairs bedroom became the dining room. “I had envisioned an inviting cottage, and with Doug’s help we thankfully made that happen,” Peter says. “We now have our ideal house to call our forever home.”

Open Up the Interior

During the first renovation, Doug opened up the closed-off layout and gave the family some much-needed space, including a larger kitchen, a master suite, and a playroom. “One of the biggest things we realized is that we could do a lot more with that space than we originally anticipated,” Peter says.

While creating more space inside was a priority, giving the exterior a serious face-lift was also important. The couple wanted to keep a cottage feel, so they opted to paint the entire exterior white and add shutters, which were painted dark blue. Doug wrapped the chimney in stone to add in some character and interest, as well as to make sure the house didn’t look too washed out.

As a landscape designer, Peter put his expertise to work in his own yard by creating a simple, clean look featuring hollies, boxwoods, and all sorts of flowers. “Between the pots, garden, and the flowers around the fence, we always have something blooming,” he says. For storage, Peter designed a shed and covered it in cedar shake. He then added shutters to the structure to match the house. 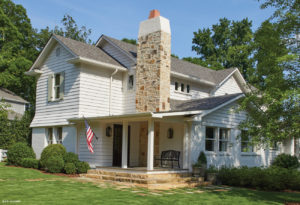 Thinking From All Angles

The house sits on a corner lot, which means two different sides of the home are visible on two different streets. To keep the house from feeling too large and overwhelming, Doug came up with the idea of adding the second story on one side only and reworking the roofline to make sure every visible side is attractive. He also turned the front door so that it faces a side street instead of keeping everything facing the same direction. 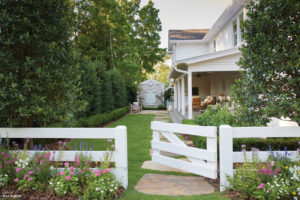 To maintain the cottage feel, Doug mixed the materials on the house, opting for siding on the second floor instead of more brick. “Building the second level with brick would have made the house feel too serious and imposing,” he says. “Keeping the heavier base with something lighter on top helps it not to appear too large.” 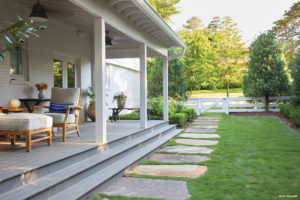 When planning the second story, Doug looked for ways to help the house keep its all-American, cottage feel. One way he did so was by including mitered corners on the siding so that the corners turn out. “That detail gives the house some dimension and shadow,” he says. “It’s also a classic look and a great way to transition between heavier brick and a lighter material like siding.” 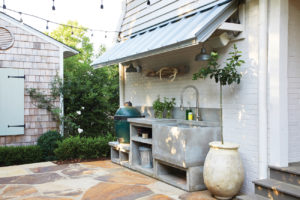 In addition to upstairs space, the second renovation gave the family many more usable areas, including a foyer, laundry room, covered porch, and downstairs guest bedroom. “We were able to double the original home’s square footage without creating a house that looks really big,” Peter says. “We wanted it to feel as much like a one-story house as possible while also preserving the work done from the first renovation.” 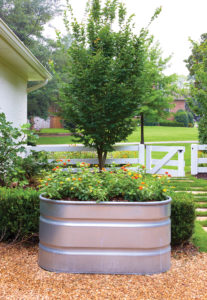