When these empty nesters were preparing to build their Mountain Brook home, they knew their antique collection would play a major role in its overall décor. They also knew they wanted a comfortable, functional space to entertain family and friends with no more square footage than was truly needed.

Ben Shepard and Darla Davis of Shepard and Davis Architecture worked to create a not-too-big-but-not-too-little English country-inspired home that feels open and airy with lots of natural light. “The house doesn’t have overly large rooms, but because of the tremendous amount of light coming in the oversized windows, we were able to make them feel very spacious, ” says Ben of the mostly one-room-deep house.

Significant to the plan were materials that created multiple elements of texture on the home’s exterior. Ben and Darla combined painted brick, limestone, cedar roofing, and a heavily-waxed mahogany door to create immediate character and add a sense of history to the new home. They carried the same feeling inside with many similar repeating textures, including cedar wood ceilings, heavily-mortared stone walls, and wooden beams. “One of the most pleasing aspects to me is seeing the way the natural light plays with the different textures throughout the house, ” says Darla. “The light works with these elements to create an extra layer of texture.”

Noted Birmingham designer and longtime friend Jane Hodges helped the homeowners combine their love of antiques with new pieces to lend energy to the home. “The addition of antiques adds a beautiful warm touch that you will not get if everything is new and modern, ” Jane says. “That’s why it’s important to hold on to grandmother’s antiques when you can.”

In the living room, a contemporary white chair is added to the mix of antique French chairs surrounding the gray velvet sofa. The dining room features a modern abstract painting that hangs across the room from an antique huntboard and matching mirror that were actually purchased separately but match flawlessly. “One thing I learned from Jane is that it doesn’t matter if everything matches, ” the homeowner shares. “She really encouraged me to mix what I love and that it doesn’t have to match. In fact, it can be more interesting if they don’t.”

While each room has a mix of traditional and new, Jane made sure to keep the space uncluttered and the décor choices deliberate. “Fewer accessories maintain the warmth, as well as allow the antiques to take center stage, ” she says.

ABOVE Outside the kitchen window, landscape designer Scott Gilchrist created a small garden with all shades of greenery.

ABOVE LEFT Antiques like the French chandelier, table, and painting in the foyer provide guests with an immediate feeling of warmth when they walk in the door.

ABOVE RIGHT The homeowner likes to collect needlepoint chairs and pillows. The art form dates back centuries to the ancient Egyptians who used slanted stitches to sew canvas tents. Today’s version of needlepoint began around the 16th century and can be done in a variety of stitches and patterns.

“Attention to detail makes such a difference. You may not consciously say ‘that’s a beautiful detail, ’ but you absorb it somehow. You feel it when you walk into the room.” — Jane Hodges

ABOVE The homeowners commissioned Atlanta artist Andrea Costa to paint an abstract in neutral shades to match the décor of the dining room. The table and European chandelier are items the homeowners have had for years, while the leather chairs with check-patterned backs were actually once Jane’s. “I’ve had so many wonderful family dinners sitting in those chairs, and now my dear friends can do the same, ” Jane says.

ABOVE Ben and Darla kept the kitchen sleek with white cabinets and Carrera marble and softened up the feel with a cedar-planked ceiling and heavy-mortared stone wall. The homeowners put one of their favorite pieces from their collection, the chandelier, on display over the island.

ABOVE LEFT While the home feels very open, each room is distinctly separate. A mortar-washed stone fireplace serves as a divider between the dining room and living room. The walls of windows let the light shine throughout both sides of the main living areas.

ABOVE RIGHT The master bedroom houses an eclectic mix of contemporary and traditional furniture. Many of the antiques such as the Turkish rug, dresser, needlepoint chairs, and antique sofa were all pieces the homeowners have had for years. The painting above the dresser is a piece by a French artist the homeowners picked up years ago while traveling. The antique sofa originally belonged to the homeowner’s family—she inherited the piece she grew up with and had it reupholstered. 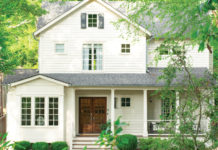 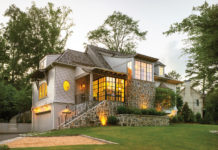 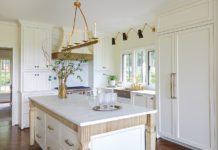 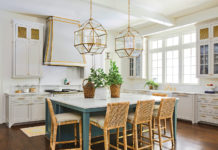 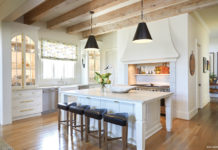