When it comes to Christmas traditions, family, of course, comes to mind. But for Katty Worley, friends are just as important. Katty and her group of girlfriends—many of whom have daughters around the same age—decided to start a new tradition last Christmas as they gathered to make gingerbread houses together. Katty hosted the party while Anne Lyle Harris designed the details, backed by décor from Abbie Daniel of Little Happies and Meg DeCoudres of Cedar Lane Home.

Abbie provided a gingerbread banner and the gingerbread houses, and Katty and Anne Lyle brought jars of candy for decorating. The event took place on Katty’s porch, which she turned into a winter wonderland of sorts. “It came together and looked so beautiful,” says the host.

Katty and daughter Sara Ashton— along with son John, who Katty says “is used to being thrown into girl world”— hosted six other girls and their moms. The gathering was focused on fellowship, friendship, and making memories.

“Growing up, my friends were such a huge part of my life,” says Katty. “It’s the same with my daughter and her friends. They are so close, and we wanted to have a yearly tradition that is all about them at Christmas. It’s their thing where they can dress up and be fancy.”

The group will gather again this year. “A different mother and daughter will host, and we may add new things to the party each year,” says Katty. “It will be fun to see the girls get excited about this event every Christmas, even as they get older.”

“We all have little girls, so we wanted to do something every year that our girls can look forward to. It’s special to them and special to us.”

Let kids be kids. Katty’s party was held outside so that the kids could make as much of a mess as they wanted while decorating their gingerbread houses. “Don’t be afraid to let them be a part of that,” says Anne Lyle Harris, who helped with the event. “Let them hang ornaments and put icing all over the place. It’s part of the experience and the memory.”

• Make it Last. Abbie Daniel of Little Happies creates banners that can be used every year for holidays and occasions, like the gingerbread one she made for Katty’s party. This way, you don’t have to start from scratch every Christmas.

• Create a theme. Katty’s porch became a winter wonderland with flocked Christmas trees that kids could decorate with their own ornaments, giving them ownership of part of the décor. “The flocked trees made it look so snowy and whimsical out there,” Katty says. “It sort of felt like we were in the mountains.”

• Provide a craft. For her party, Katty ordered gingerbread houses from Little Happies. The houses are made of wood (6×8 for the smaller ones, and 8×10 for the larger ones) . Guests were each given a kit with graham crackers, icing, and candy for decorating. “The best thing about the wooden structure of the gingerbread houses is that they will remain intact,” says Abbie. “After the candy and graham crackers are worn off and the season is over, simply wash the wooden houses with soap and water and store them to reuse the next year.

• Use candy—and lots of it—as party décor. “We had piles of candy for the kids to decorate with,” Abbie says. “And they loved eating it, of course.”

• Swap hostess duties each year. To alleviate the pressure of one person hosting year after year, change it up. That way, every kid gets to enjoy having the party at his or her house. It also helps to share the décor—like the banner or the wooden gingerbread houses—to keep some of those traditional, anchor elements while also making things easier for the host. 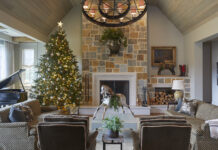 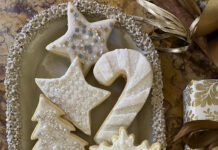 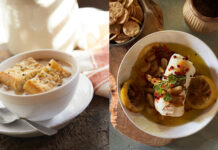 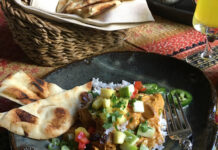